For this storytime, we will be learning about Winter and what we do when it is cold and snowy outside. We will do an intro where we will look at a map and some winter wear, then we will read four books, sing four songs with books, and make a snowman ornament!

Intro: Where Does It Snow?

This may or may not be necessary for your group of kids, depending on your location. We live in Alabama so we rarely get snow and the preschoolers were too young to remember any. So, I pulled out a map and we looked at where we are. I said that it is warmer down south, so we don't get as much snow as people who live up north, but if we are lucky we might see some snow later this year.

I packed a bag with random objects, some which are winter themed, like snowman, mittens, and a little Christmas tree, and others which aren't, like sunglasses, shorts, and a flower. I pulled them out one by one and asked the kids, is this something we see in the winter?

Books That Will Give You Chills

David is excited for the snow, but he must help his mother prepare the house for guests. He keeps running to look out the window. After a nap, he and his family go outside to see a winter wonderland! I liked that the illustrations showed the neighborhood gradually becoming snowier, and in the end I was able to flip between the before and after pictures. Everytime David ran to the window, I had the kids drum on their lap to mimic his footsteps.

If It's Snowy & You Know It, Clap Your Paws! (Kim Norman)

This book shows a bunch of animals playing and enjoying the snow together. It's to the tune of "If You're Happy and You Know It," so the kids will recognize it. It mentions different winter activities like building a snowman, snowball fights, and skiing, so I stopped after each page to explain to the kids what each activity is. 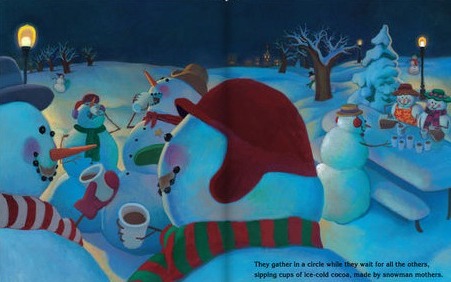 A boy wonders what snowmen do at night, after coming out one morning to find his snowman looks different (he was starting to melt). He thinks of a number of activities, from sipping hot cocoa to ice skating and baseball. The star of this book was the snowman with the pickle nose! The kids thought that was hilarious.

Just a Snowy Vacation (Gina & Mercer Mayer) I was surprised none of the kids were familiar with the Little Critters series, but they LOVED this! I explained that Brother often lies, so we looked at the pictures to pick out clues of when he might be lying. To make things even funnier, I got up and showed the kids some of Brother's "tricks" from the skiing scene pictured above.

Songs With Movements (To Keep You Warm)

Snowflake, snowflake land on my nose, (touch finger to your nose)

Snowflake, snowflake in the air, (reach your arms up)

In the snow! (SPIRIT FINGERS)

Warm Clothes For When It Snows (By Me!)

You put your right mitten in,

You put your right mitten out,

You put your right mitten in,

And you shake it all about!

You do the snowkey pokey

And you turn yourself around.

That's what it's all about!

These snowmen ornaments were a hit and they are easy to make, though preparation may be more difficult if you weren't lucky like me and had foam scarf and button stickers on hand (we did have to make the noses ourselves).

Prepare popsicle sticks by painting both sides white. Once try, hot glue a loop of yarn on the top of one side to create a hanging mechanism. If needed, cut out scarfs, noses, and buttons. To assemble, stick the scarf about 1/4 way down then add the carrot nose about half an inch above it. Stick three buttons in a row below the scarf then with a marker, draw two eyes above the nose and a smiley face beneath.

Write your name and the year on the back.