Kids love this super fun dinosaur themed storytime! We will meet the pterodactyl and stegosaurus, read three to five books, sing three songs with movements, do an interactive flannel story, and finish with some dinosaur coloring pages!

I began this storytime by showing them the stegosaruas and asking if they'd ever seen one. We talked about that their are different kinds of dinosaurs, including one that looks like a bird called a pterodactyl. We went over their colors and features and discussed where the kids might have seen dinosaurs before, like the show Dinosaur Train or Toy Story.

Note: These are Valentine's Day dinos I got from Walmart a few years ago! The kids loved hugging them!

A Selection of Dino-Themed Books 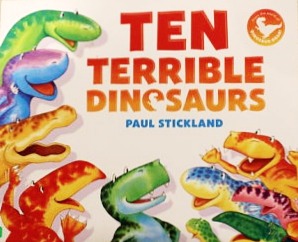 Like "Ten Little Monkeys Jumping On the Bed," this is one of those stories where you start with ten things (in this case, dinos) and they keep getting into predicaments until there is only one left. When we got to around five, the kids were able to count down with me. It also ends with a great big ROAR!

Harry and the Bucketful of Dinosaurs (Ian Whybrow)

In this darling little story, a boy named Harry finds a bunch of toy dinosaurs in his attic. He loves the dinosaurs and learns all their names, but one day he leaves them on the train. The kids loved when I pointed at them and gave them dinosaur names like Harry did.

Of the many musical dinosaur themed books out there, this one is by far my favorite. It comes with a music CD or you can watch the music video on YouTube here. I have gotten so good at rapping this that we don't really need the music. Have the kids do the different dance moves with you while you read or play the music after!

This is a board book with little tabs, so I wouldn't read this one to huge crowds. Each spread tells you about a different dinosaur with a fun rhyme scheme. I LOVE Sandra Boynton books! They are always so clever. The kids loved that Dozy is shown reading the book!

We Are the Dinosaurs (Laurie Berkner)

This is a fun book that you can have the kids march and stomp around with. There is also a song on YouTube and judging by the comments, it's one that the kids will remember!

Flannel Story: One Dinosaur Went Out to Play

I found this on Mel's Desk, but I'm unsure if she's the original author. I made a couple small changes, including a twist where instead of the fifth dinosaur making the running sounds, I made a flapping sound and had the kids guess who it was!

(Yes! It was the pterodactyl and they got it!)

One dinosaur went out to play,

Out by the swamp one day.

She had such tremendous fun,

So she asked another dinosaur to come:

Continue until the fifth dinosaur, where I flapped my arms and went "swoosh, swoosh" and had them guess. Then for the last line, end with "So they played until the day was done!"

Dinosaur, Dinosaur stomp your feet. I took bits and pieces from a couple

Dinosaur, Dinosaur show your teeth. versions of this I found on Pinterest. Have

Dinosaur, Dinosaur swing your tail. the kids do the motions with you!

Dinosaur, Dinosaur give a ROAR!

Dinosaur, Dinosaur sit on the floor!

All Around the Swamp Sing to: The Wheels on the Bus

the T-Rex. The kids loved this one!

This storytime was super involved so it was nice to finish with a relaxing coloring page! There are ton of different options you can find here, but I let the kids choose just between the Pterodactyl and the Stegosaurus, since those were are two reading buddies!